Gran Canaria is rich in marine life, with a huge variety of colours, shapes and species. The waters are warm and clear all the year round, and it’s position in the Atlantic just off the coast of Africa gives the island a mix of species from Mediteranean, Carribean, African and Atlantic waters. Much of the island is also surrounded by a rock shelf with depths of between 20 and 40 meters, making it an ideal depth for recreational diving. When you add to this the stunning scenery that historical volcanic eruptions have produced, and the effects of the gulf stream, you get an island with a fascinating mix of excellent dive sites.

Gran Canaria has a fantastic selection of scuba diving and snorkelling sites which will delight divers of all levels and abilities. There are sheltered bays and coves where you can take an experience or training dive, or deeper wrecks where more experienced divers can explore. As you travel around the islands, there are a number of main dive sites which visitors explore on a regular basis.

The best diving area on the island is unquestionably the Arinaga Marine Reserve on the east coast, known better as ‘El Cabrón‘, where divers from most of the major dive schools can be found every day of the week. Working towards the south there are several possible entries but these are onto unremarkable shores with variable visibility and little life.

Gran Canaria is on the same latitude as The Red Sea, Florida and the Sahara desert, and has a similar sub-tropical climate. Daytime temperatures never drop below 14C in winter and are usually in the 30’s in the summer. Although very hot in summer, the humidity is relatively low and this makes the temperatures more bearable. The solar UV factor is very high however and a high factor sun cream is advised. For much of the year the island comes under the effect of the ‘trade winds’, which blow strongly from the North East, helping to keep the effective temperatures down. 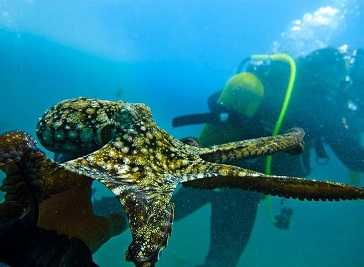 Our PADI Diving Resort has optimally trained Professional PADI Dive Instructors to guide you to the most interesting dive sites, which are mainly the Marine Reserve “El Cabron” by Arinaga and for different Diver experiences, Wrecks by Las Palmas and Mogan
Read More